There's a right way to do this:

Some of the critical machining work will need to be done on the lathe itself - stuff like modifying the existing X axis (cross slide) leadscrew and perhaps machining up the housings for the ballnut and thrust bearing for the cross slide. It's a question of "physician heal thyself", something that can't be done while said physician is out of action.

What to do first? Seems to me I should get the cross slide assembly done first, then move on to the saddle. Rather like doing the Z axis on the Bridgeport conversion before the more straightforward X and Y drives, as that's where the tricky stuff lay.

If this goes well, I should have a functional manual lathe with a ballscrew cross slide (X axis) and a servo drive. I can then move to the more straightforward saddle drive (Z axis), glass encoder scale etc.

So first, before I can proceed much further, I need to make my mind up about the saddle and cross slide mods I will finally go for. Although I'm not shy when it comes to machining the original parts, I'd rather not end up making a pig's ear of it.

The cross slide itself is fairly simple - machine a shallow slot on the hidden underside of the body to receive the magnetic trip. Then drill and counterbore the fixing holes for the ballnut yoke. I may do that later, as removing the cross slide is fairly easy.

The saddle is a bit more involved. Requires cleaning up the rough cast leadscrew cavity and making some slots for the encoder body and the limit switches. Let's get those features finalised next....

at 14 November No comments:

So how's the CAD work going then, Fatty?

I've put lots of effort put into this recently. At least I seem to be making some sort of progress. I'm not the kind of guy who just holds a part up against the machine, screws it in place and then figures out how to add the next bit. There are a lot of moving parts here and not a lot of space.

I've modelled up most of the critical parts to a appropriate degree of accuracy, so I can design stuff to fit together with a fair degree of confidence that it will assemble and work.

Here's the section view through the cross slide ballscrew. I've got a simple rigid sleeve shown here but that wouldn't allow any float, which would make setup and adjustment rather tricky. In fact I plan to have a 14mm Rotex "spider" coupling joining the new ballscrew and the original leadscrew stub. 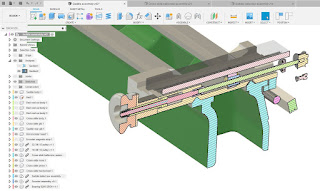 The back of the machine is looking somewhere between "busy" and "tricky". I hadn't realised the mounts for the large ballscrew would be so large. Fitting them and the saddle and the ballscrew and the encoder scale in that space will take some juggling to end up with a tidy solution. Looks workable but isn't your slam dunk. 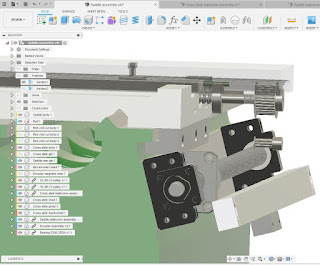 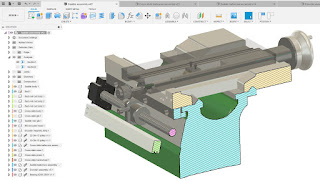 And stepping back a bit: 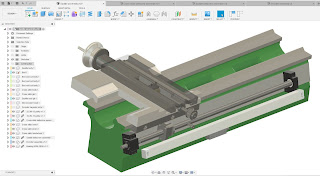 The "missing component" that houses the cross slide ballscrew thrust bearing, connects the saddle to the saddle ballnut and picks up the encoder read head will be a critical part. It also holds the servo motor, houses the drive belt and pulley and provides some adjustment to adjust the belt tension and align the saddle ballnut.

Next - figure out a sensible solution for the "missing part" that I can make without needing a PhD in machining....

at 10 November No comments:

Saddle ballscrew assembly - getting some bits together

Preparing to get on with the Bantam CNC conversion

Here's what I've got in the pipeline, heading its way from various emporia in Korea and the UK. Spending beer tokens is the easy bit, although getting them in the door past the Domestic Manager can be fraught. But that's no reason to hold back.

I've gone for parts from the DY Global scrapyard in Seoul, stripped from some bygone machine or other. Rather than take my chances with some shark on AliExpress flogging bent (literally) rolled ballscrews, I thought I'd go for second hand decent ground jobbies. In some cases, they offer new old stock parts from the likes of HSK, Hiwin, TBI etc. In this instance, there was nothing suitable for my needs. However, I finally settled on the following:

1205 ground ballscrew for the cross slide. I've convinced myself the ballnut will (just) fit in the cavity in the saddle under the cross slide. I'll clean up the rough cast cavity to give it a bit of margin but it The ballscrew itself is longer than I need but I'll machine it down when I have actually designed something for it to go in.

And a 2005 ground ballscrew for the saddle. It's longer than I need but as I'm not yet certain what that is, I'd rather cut down a longer ballscrew than curse a shorter one. 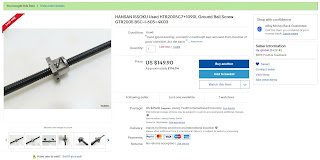 From DY Global's description:
Main Size (Metric)
Ballscrew supports:
The big one seems to come with a set of supports. These are the generic BK15 and BF15 supports that you see on all the Chinesium sites. There's a reasonable drawing here ballscrew supports - Hiwin.
And for the ballscrew / ballnut themselves, the Issoku ballscrews home page is a good start. Issoku HTR2005C7 ballscrew (page 68) and Issoku HTR2005C7 ballnut (page 12) look about right.

As for the cross slide ballscrew, I simply modelled it myself, along with a ballnut created from the dimensions on the ebay page. I'll check and correct that when I have something to measure up. I suspect it's so old there's no data on the internet.

I've also received an "EHM" miniature magnetic linear encoder from M-DRO that should fit underneath the cross slide table itself. The scale is a magnetic self adhesive strip of about 1mm thickness and the head is just 10x12mm (40 long), so can be buried out of the way. Resolution is 5um - not much point going for any better. Wasn't cheap but hopefully it will at least work.

For the saddle scale, I have a full sized HXX glass scale that I bought in China, also 5um resolution. It was sized for this machine so is 700mm long, with 600mm measurement range. I can cut it down if required but ideally it will be OK as it is. I've modelled it up in Fusion.

For the cross slide drive, I plan to use an HTD 3mm pitch, 15mm width timing belt. The largest pulley I can fit in under the cross slide in its extended position would be 32 teeth (32-3M-15) and for the motor I should be able to get something like the 10t (10-3M-15), assuming that's not too small for the motor shaft. With a 150mm long belt (150-3M-15) on these pulleys, the centre distance will be around 42mm. I want to keep it fairly compact.

ZF seem to do some sealed miniature microswitches. These should just about be able to hide themselves under the cross slide, within cavities in the saddle - I don't mind machining bits off here and there. Got some Omron ones too, in case they don't work out. These are not sealed but appear to be half decent quality (hopefully) and appear to be intended for industrial use.

Finally (for now), I ordered some oilers. The Bantam is rather light on lube points, as John Stevenson pointed out. I will press a few of these into the cross slide etc to facilitate oil getting where it needs to be.

I want something half decent here, so I've gone for a Nachi 6200-2NSE9C3 Sealed Ball Bearing (C3 Clearance) 10mm x 30mm x 9mm. I'm not planning on any fancy paired back-to-back assemblies here. This is a single row deep groove bearing and it should be up to the requirements without having to step up to a double row bearing. I can't see it collapsing under the load it will see somehow.

A 14mm Rotex coupling and orange spider will join the stub of the original leadscrew with the new ballscrew, removing any axial load. This is only allowing the handwheel to operate the ballscrew, while the servo and encoder are all on the ballscrew side of the coupling.

at 10 November No comments:

CAD assembly for the Colchester Bantam in Fusion 360 - bed, saddle and cross slide

Yes, I'm still talking to Fusion, despite our recent misunderstanding. I'm not the kind of guy to attempt a CNC conversion without spending weeks designing everything in CAD. Rightly or wrongly, I prefer to model up the base machine, then design and import the new components to make it work. Ideally I'd be able to import stuff like the fasteners, pulleys, bearings, leadscrews etc from places like Misumi, Traceparts, McMaster Carr etc but I won't find a Bantam CAD model anywhere, so I need to model it up myself.

This bit takes forever and doesn't really achieve much in itself but with a bit of focus, a half decent model can be crafted up in a few days, around all the other stuff that needs to be done in this world. It doesn't need to be photo realistic but I want to be able to create parts that can be CAMed up and made without having to redesign them - or find they don't actually fit once I've made them.

This is basically an imperial machine, albeit with metric cross slide and top slide leadscrews (the gearbox and leadscrew are imperial, natch), so the dimensions are all made in inches and the fasteners are all UNC / UNF threads etc. Luckily I have the manual in PDF for reference, showing all the "standard" parts and the exploded views. 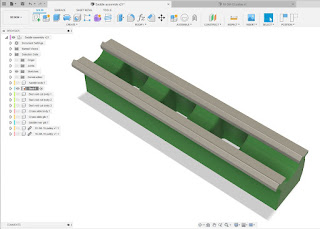 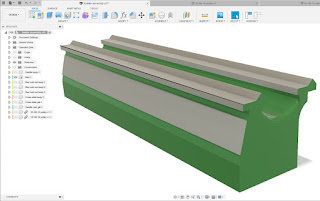 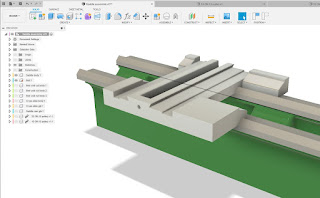 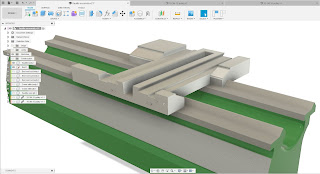 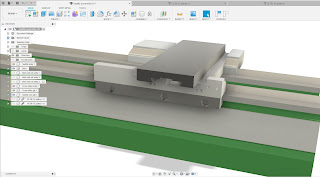 And a quick idea of where the 10t and 32t pulleys might fit: 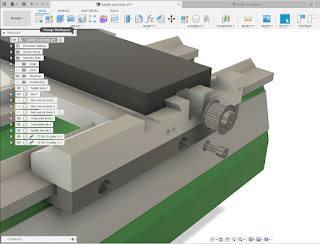 Still quite a bit to do to both the model and the concept itself but it's a start...
at 01 November No comments:

There's a right way to do this: Some of the critical machining work will need to be done on the lathe itself - stuff like modifying the...