Let's get these hoses and couplings changed. First, I need to remove the BSPT-BSPP couplings. 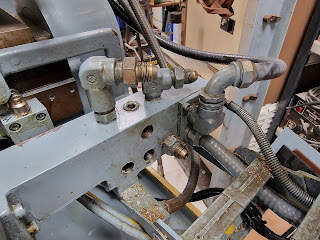 Then fit the replacements and the new hoses. 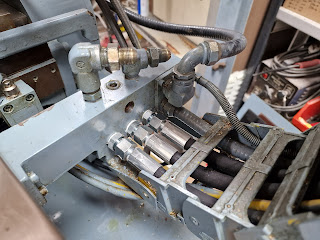 That went well but I mustn't forget the 3 short hoses that run from this manifold block to the turret. I didn't buy those first time round, as I wasn't 100% sure that (if) the first lot would fit. Fortunately they do. They run from the rear of the turret.... 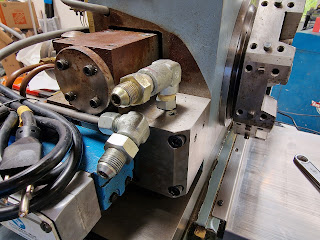 ...to the manifold black: 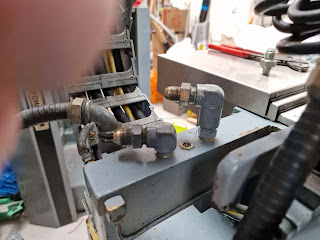 There. Ready for the new hoses. The 3rd (middle) hose is for the coolant feed. 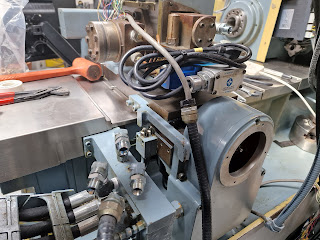 When I'm ordering up new hoses and couplings, I should replace the small power drawbar hoses. I know what will happen if I don't. 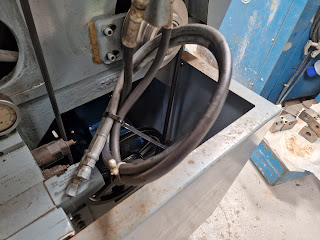 Like their bigger brothers, they have weirdo couplings. What are they? 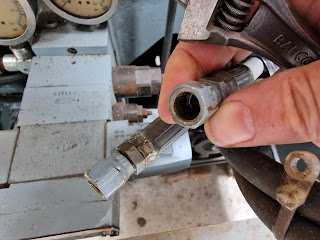 As ever, there's a veritable cocktail of fittings here. 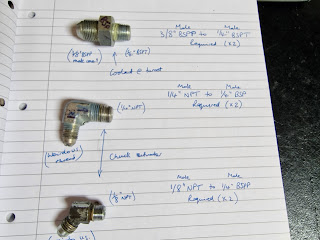 Pneumatics Direct have what I need at pretty decent prices:

Here's the link to one of the pages eg for the BSPP Male x NPT Male adaptors.
Not forgetting the actual hoses themselves. I could probably use 1/8" BSPP hoses but the adaptors seem to be much less available. So instead I'll use 1/4" BSP fittings and hoses.
This guy is just up the road but his prices are very good and the service was blisteringly fast. I ordered the 3/8" hoses on Sunday last week and they arrived Tuesday morning. Hope the next set are as rapid.
Coolant tank and pump:
While this lot is happening, let's take a look at the coolant tank and pump. It looks as if The Creature From The Black Lagoon may be in there. 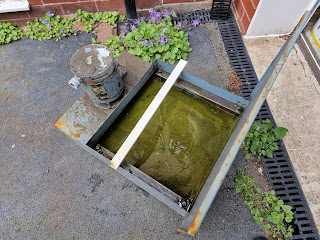 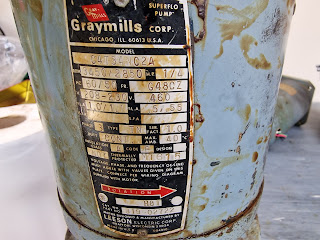 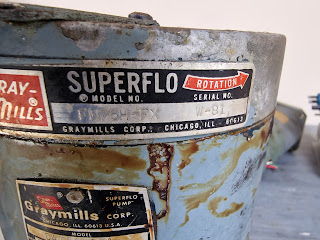 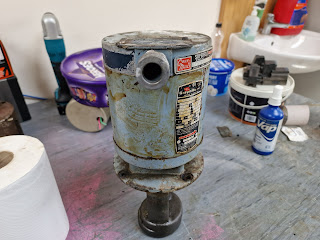 Claims to be configurable in star or delta, according to the diagram under the terminal cover. 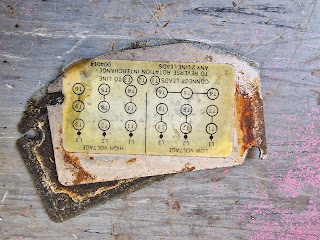 However, there are only 3 wires and a rather un-Mercan-looking terminal block. Looks to me as if this has been rewound. Would they have done that? But if the entire motor had actually been swapped, it seems unlikely the replacement would have been made in Chicago. Closer investigation required.... 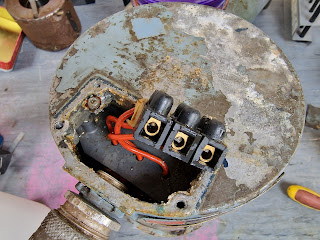 The shaft was a little tricky to remove but I got there. There's a stainless shaft extension and an aluminium rotor. 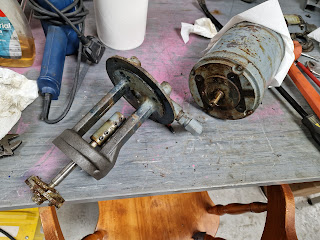 But wait, it shouldn't be pissing shitty brown water out of the electrical enclosure. WTF is going on? Off with the long screws that hold the casing together. 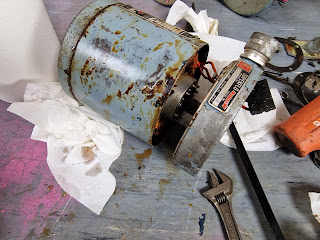 Hmm, yes, the thing is swimming in water. I guess I could dry the stator out simply enough but let's take a closer look before doing anything major. The sealed bearings look OK.... 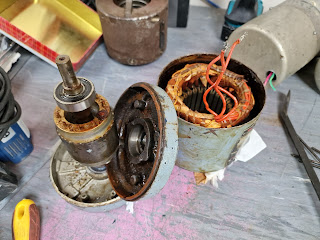 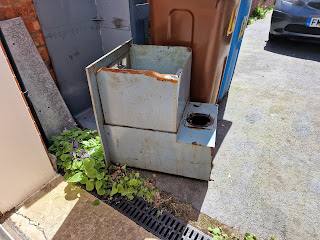 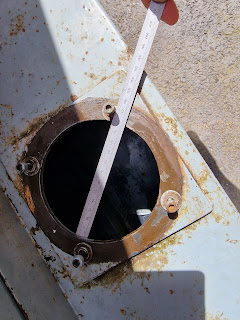 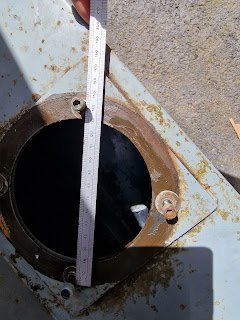 ...and a depth of around 240mm from the flange mounting face. 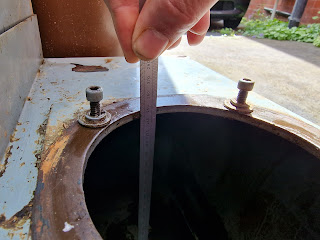 Hmm. That old pump has a shaft length of only 150mm. So the pump can only access coolant above a depth of 110mm. The bottom 4" or more can't be used before the pump runs dry. Can't imagine they actually designed it that way. There's a shallow dam on the floor of the tank to avoid swarf getting to the pump, which would be rather redundant if they never expected the pump to be closer than 4" from the bottom.
The rotor and shaft extend directly from the motor shaft without any outboard bearings, so attempting to extend the pump by 4" would be a dumb exercise. Chances of managing to get it running true are sub zero. And hacking the cast iron housing to extend it by that 4" would be equally dumb.
Right, I consider a rat well and truly smelt here. This is surely a replacement pump - that has also been rewound, FWIW. It may fit the aperture and the fixings but I can't imagine the original didn't reach anywhere near the bottom of the tank. And given that the motor looks pretty sad, I think I'll just get a replacement with a full length (240mm) shaft and be done with it. That alone will almost double the useful capacity of the tank from where it is.

How about this Vertex 1/4HP 240V single phase from Rotagrip - decent quality, single phase 240V, 240mm and 1/4HP. I will need to tap some more fixing holes (they are on a larger PCD) but I have the technology to do that.

Let's get these hoses and couplings changed. First, I need to remove the BSPT-BSPP couplings. Then fit the replacements and the new hose...