What up, Fatty?
I thought the best option would be to stop talking and get machining. So I downloaded an SVG file from the internet, imported it into Fusion, extrude cut it into a piece of stock and let rip with a 2mm PCB router bit. The machine isn't really designed for small, high speed cutters but I ran the spindle around 3000rpm, not having used this system to any meaningful degree so far. That was going to take some time then - but the idea of doing a trial is to see if anything misbehaved.

Here's the start of the job. I felt that some ZZ Top (Eliminator) would be an appropriate soundtrack. The whole job took over an hour(!) - I would certainly increase the feedrate (feed per tooth) before repeating a job like this.

So. It went OK, as in nothing blew up or broke. However, there seems to be an issue when you look more closely at the finished work....

How did the trial work out?
Well, this is the finished job. The basics are there but you can see that the tool had drifted up in the Z axis by the time it got to the first letter of the Honda word. It barely scratched the surface of the H, yet it started out at 1mm depth. The workpiece is pretty flat, so it's not a warped surface to blame. I noticed the issue when it was on the second letter ("O"). I raised the knee at this point, so that it would at least finish the rest of the job without cutting air. 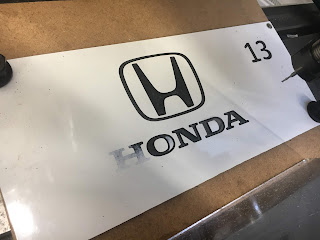 Once it thought it had finished the job, I went back and created a file for the H and O, raised the knee to get a decent engagement and re-ran them. From here it seems that nothing outrageous has happened, although not entirely happy about the Z drift. 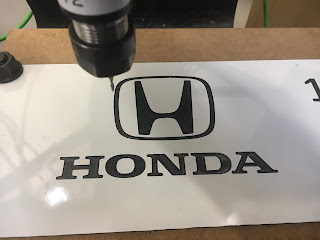 So yes, the final job looks OK (after running 3 jobs on it) - until you actually take a closer look. I was hoping to get some clue as to how the tool had managed to drift up as the work progressed. You can see here that it clearly did so in steps, as the depth is supposed to be a constant 1mm throughout: 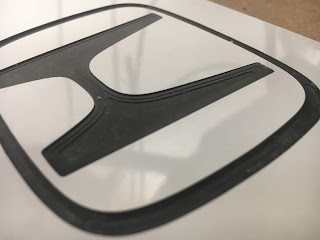 The same effect can be seen on the lettering as well as the logo itself: 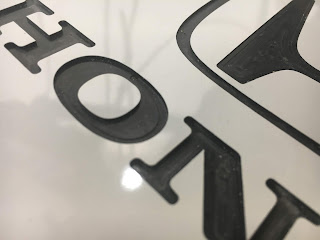 And here's the big giveaway. At the end of the job, the quill is returned to height Z0 (in machine coordinates). But it's clear (to me at least) that it's gone past the home position by about 2-3mm. The top edge of that horizontal target strip thing was at the centre of the left hand proximity sensor when we started.

That there's your smoking gun, fatty. You can even see that the LED is lit on that sensor. The travel limit sensors at the top and bottom are normally closed (lit up), while the home sensor is normally open (lights up when it sees the target). The Z axis has gone past the home position. 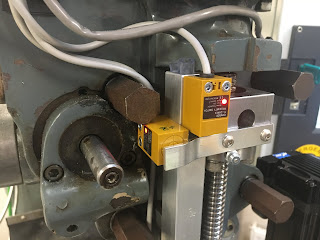 What's the problem?
Well there's the question. Almost certainly the controller hasn't magically moved the home position on me. You've got to start somewhere and that seems like a reasonable assumption.

So I'm 99% certain this will be due to noise pickup on the Z axis step signal. Inside the cabinet I now have three SMPS PSUs chuntering away, plus two PWM servo drivers and a VFD. It will be buzzing like a wasps nest inside there and although I used grounded screened cables and took care to fit an EMC filter on the Yaskawa VFD, the X axis was seen to drift slowly (but intermittently) until I fitted some common mode noise filtering in the form of a toroidal choke. There's a clue in there somewhere.

Firstly, I will try to recreate the issue with a test file that cycles the table back and forth with the VFD running, stopping from time to time to measure the Z height. That should help to establish a baseline.

Then I will look at the effect of fitting some of those clamp-on ferrite EMC filters to the cables and look for any obvious noise paths.

What about the Chinesium DRO?
For completeness, I had the Chinesium DRO (HXX brand) connected up on the X and Y axes. At the end of the job, the table seemed to have returned correctly to the starting point. That suggests that there isn't a similar issue with the X and Y movement.

It's probably a good time to consider refitting the glass DRO scale to the Z axis. I've held off until now, as it would get in the way if I needed to access the ballscrew, proximity sensors etc. That way, I can directly read off any shift in the home position height without needing to bugger about with DTIs etc. Let's do that first....
at 02 May 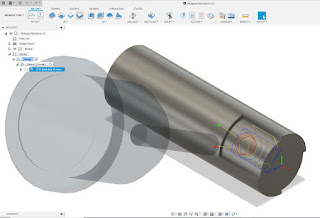