Let's get some stuff for the 4th axis build:
Quite a few, varied parts required. Having done 96% of the design now, I can be reasonably confident that I know what they are.

Belt and pulley sizes:
I need to work out the best positions for the pulleys, given that belts come in only certain increments. I'm planning to get my belts and pulleys from The Bearing Boys, as I've had good service from them before.

I'll also go metric and choose a reasonably fine pitch (5mm) and narrow belt (15mm). I could get away with a much narrower, finer pitch belt but for pulleys this size, you normally expect  a sizeable torque, so that's the choice you tend to find. I need a driven pulley that will fit the 45mm nose of the drive. There's nothing sensible in the Taperlock system to fit that size of shaft, so it will need to be a "machinable boss" type pulley. Said boss needs to be at least 45mm to leave meat for the six M3 fixings.

When I was using Solidworks to design the Blidgeport X & Y axis drives, I was able to use the SW belt and chain wizard to automatically position the pulleys and / or set the belt length. Fusion 360 doesn't have that feature (yet?), so it's back to use of pulley centre calculators...

Taking the effective diameters for the smallest pulley I can fit on the servo motor with a Taperlock fitting (34T) and the smallest boss type (machinable) pulley for the driven end with >=45mm boss (60T), I can roughly position them in the assembly and select a couple of belt lengths based on the resulting centre distance.

For a 34t driving and 60t driven, that gives a min distance of ~85mm. However, I need some adjustment distance and the next belt size up from that. If I use a pulley centre calculator with the available belt lengths in the 5mm belt pitch / 15mm width I plan to use, I can see that the smallest usable size would be 425mm, with 450mm as the next longest. 92.7mm centre distance would correspond to the 425mm length and it looks good in the assembly view.

The pulley data is here for the Medway ones that appear to be on offer. The boss diameter seems to be 50mm for the 60T pulley.

Right. That's the pulleys and belt chosen, ordered and indeed received. Obviously I added a couple of completely unnecessary belts to the order for no reason at all:

This arrived a few days later. Slight bummer at this point - the boss diameter of the delivered part is actually 45mm (not 50mm), which is the same as the OD of the drive flange. I will have to either change my assembly to accommodate it or ask for them to supply a part that agrees with their spec. Not what I'd planned.... 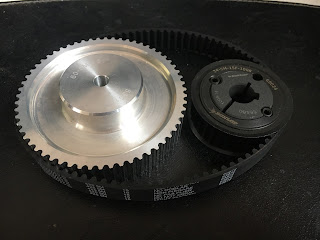 Servo motor:
I don't fancy messing with Chinesium clones this time. I'd rather be playing with decent quality ("proper"?) systems such as Yaskawa, Mitsubishi etc. There are outfits in S Korea that acquire used parts from scheduled maintenance programs and scrapped machines. These are generally still functional and they seem to be relatively reputable.

Found a 200W Yaskawa motor for £80, with the brake option. That's a 70mm flange, with 14mm shaft, about 133mm long. The motor datasheets tell you everything you need to know about them.

Servo drive:
Also found this 200W "Sigma III" Servopack, which is their 3rd generation product at £80 from the same outfit that supplied the motor, so it came in the same package yesterday. The date stamp seems to be 2006, which seems about right, given that they are now selling Sigma 7 products ie 4 generations on from this. It's missing the front cover flap thingy, hence the reduced price. Note it has no connectors - some do but mostly they don't. Unless they came off a piece of scrapped equipment, they probably don't want to damage the harness when swapping them out. 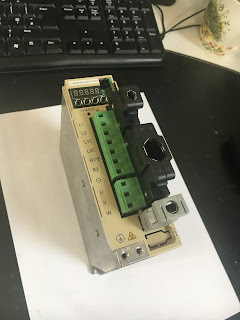 There's tuning software SigmaWin+ Ver. 5 to go with it.

As noted, the Servopack came without connectors. Apart from the green power plug, the rest are std connectors from 3M and Molex. And said power connectors are actually fairly standard, even though the specified part number appears to be a "special" (ie proprietary to this application). Here's what I got - and I seem to have done a good enough job. As you can see in the above photo, the various plugs all fit.

Mains and motor connector(s):
IMO Precision 20.960M series or Camden Boss CT9400 series (7.5mm pitch PCB connectors). I got some 10 way connectors and cut them to give a 7 way and a 3 way. I didn't waste any connectors or compromise the insulation in the process, as there is a gap between conductors. You could manage with one 10-way connector. Farnell no longer stock them but you can find them on ebay etc.

Harmonic drive:
These harmonic drives are precision gearboxes, made in Japan to exacting requirements. There's absolutely no way I would ever fork out for a new one. They come up on ebay regularly and the best choice and prices seem to come from said Korean outlets. Even so, they are typically around the £300 mark for the "32" sized SHG version.

There are various styles available but what we want is the type with integral radial / axial bearings, which allow you to mount your chuck directly, without the need for additional bearings, structure etc. That's the "SHG" model. You can see that sizes in the 20, 25, 32 etc range would at least fit on the machine table. The load (force, moment) capacity roughly doubles as you go from one size to the next.

Looking at the specs and also the various examples on Youtube (Metal Musings has a lot to answer for here), I'd be tempted to go for either the "25" or "32" sizes. For one thing, the next larger sizes would be too expensive to risk trying to get past the Domestic Manager, for fear of getting found out (= pain of death).

Finally, I found a "32" size drive that was described as being "rusted", although the photos didn't look too bad. And at ~£200 delivered, it seemed a relatively good option.

Here's what just turned up: 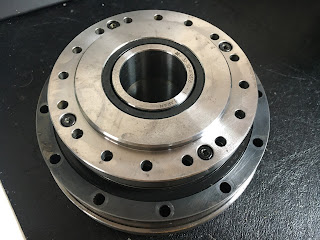 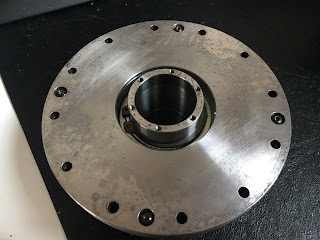 Along with a note from the vendor. You don't get these from your average ebay trader: 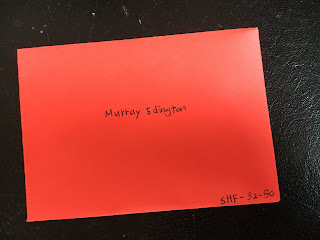 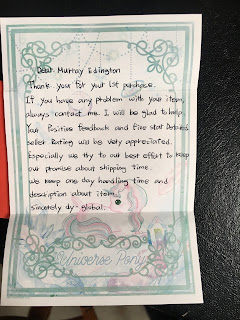 Certainly, it looks and feels pretty smooth. There are some feint marks where I assume the "rust" has been gently removed but beyond that it looks good to me. It can't have been much more than superficial to begin with.

Loominum stock:
I redesigned the assembly slightly to reduce the width from 205mm to 200mm. This cunning reverse ferret allows me to use a std stock width. It's hardly rocket science but it became a sensible move when I came to order stock for the base and front plate, as they need to be a bit beefier than the cover plates. I have some 9.5mm (aka 3/8") stock for those but nothing in the 15mm thickness came to hand. Need something decent for the base and front plate, as they are the main structural parts and require half decent (M6?) fixings.

Found some suitable stuff on a UK ebay site but the guy had left a note saying he was on holiday for a week, which most right minded individuals would take to mean the best part of 2 weeks to receive. I later found out he meant there may be a few days delay due to the virus situation. What a dumb schmuck, losing business like that. In the meantime, I ordered it from a Polish site.

That seems to cover most of the material. Will need to order some fixings once I know what they are, not least the M3 x 45 screws for fixing the the large pulley to the drive input.
at 05 June 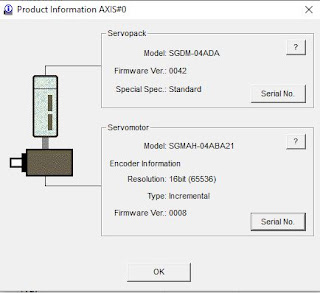