So far I've made the motor / belt / tensioner housings for the X and Y servo motors on my evolving Bridgeport conversion. I've blogged much of that work here, as I used The Shiz to do the work. I'm at a point where I could install the completed X and Y servo assemblies  but that might be a bit premature, as the Z axis still needs some attention.

I modelled the complete BP conversion in Solidworks back in Canada (2013-2014). I also made most (all) of the components back then, using the BP itself. Obviously as I was making the compts using manual machining ops, some of the compts were a bit rough, which is why I have been remaking them on The Shiz.

In the case of the Z axis bracket, I made a relatively decent job of it. However, this is one of the more critical parts on the conversion and needs to be pretty robust. My manually machine bracket was made in loominum, so now I need to recreate it in steel. It's also a chance to make last minute changes, having digested the component over the last few years.

Importing models into Fusion 360 - the issues:

I don't have access to Solidworks any more. I suppose I could use one of the academic licenses that are used by our 2 oldest sprogs (both studying mech eng) but these licenses only run for a year, they are often a bit flaky and the more work I do in Solidworks, the more I risk being unable to access later. Besides, all the groovy multi-axis toolpaths etc are available in Fusion but not in SW.

The importing function in Fusion is pretty slick and the whole head assembly came in exactly as it looked in SW. However, when you import an assembly from one CAD system (SW here) into another (F360), you lose all of the joints / mates that hold the subcomponents together and define degrees of freedom / movement. That's true for all of the CAD systems I'm aware of - it's simply too complex to do otherwise and quite possibly there is proprietary knowledge reqquired that effectively prevents it. And finally, the imported models are simple solid bodies - the parameters and design history have been lost.

So, although the imported assembly looks pretty neat, it's no basis for working off. If anything needs to be edited or recreated, the direct editing functions are simply too limited and clunky. Instead, you basically need to recreate the models from scratch in Fusion.


That's what I've been doing so far for the X and Y axis components.

Here's what I modelled back then. The head casting is modelled in sufficient detail to include the critical mounting surfaces and includes a dummy cylindrical quill body. The ballnut rides up and down the ballscrew and connects to the quill by means of a rather complex "yoke" (bracket). I've coloured it in black here for clarity. In the original SW assembly, the mates actually allowed the motor, pulleys, ballscrew etc to rotate and the yoke assembly to move up and down. Not essential but groovy all the same.

Here's a bit of an upshot. 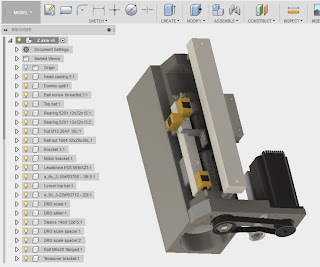 Better view here, showing the (black) ballnut bracket, about half way up its travel: 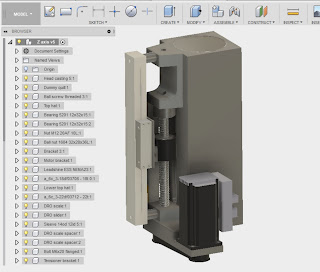 Scction view. I don't like the crosshatching that Fusion provides. 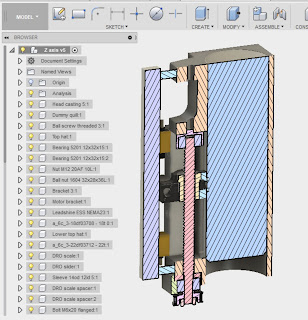 Here's the original, imported model of the bracket: 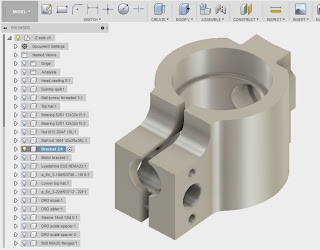 And a 2D drawing created from it, with various projections, sections and details: 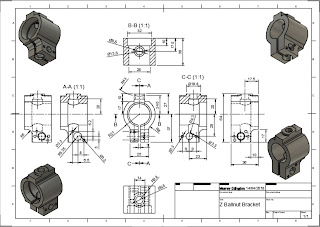 From that drawing I made this model in Fusion. I've taken the opportunity to add a couple of chamfers. 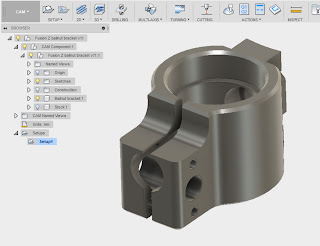 And here's the detailed drawing of my new model. 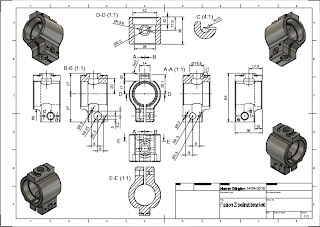 That was a bit of a carry on but only took a couple of hours, interspersed with short bouts of TV viewing.

Next - go into CAM environment and prepare to flash up some toolpaths....
at 15 April 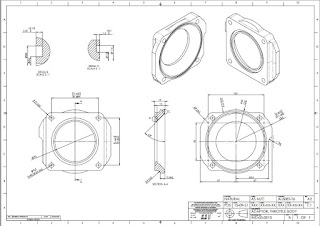